I drive by this house each morning taking my kids to school.  I took this picture because simply describing it can’t do it justice.  Telling you that a large tree had grown in front of the steps is simply too understated.  You gotta see it.  To see it is to witness the absurdity of it, not just the fact of it. 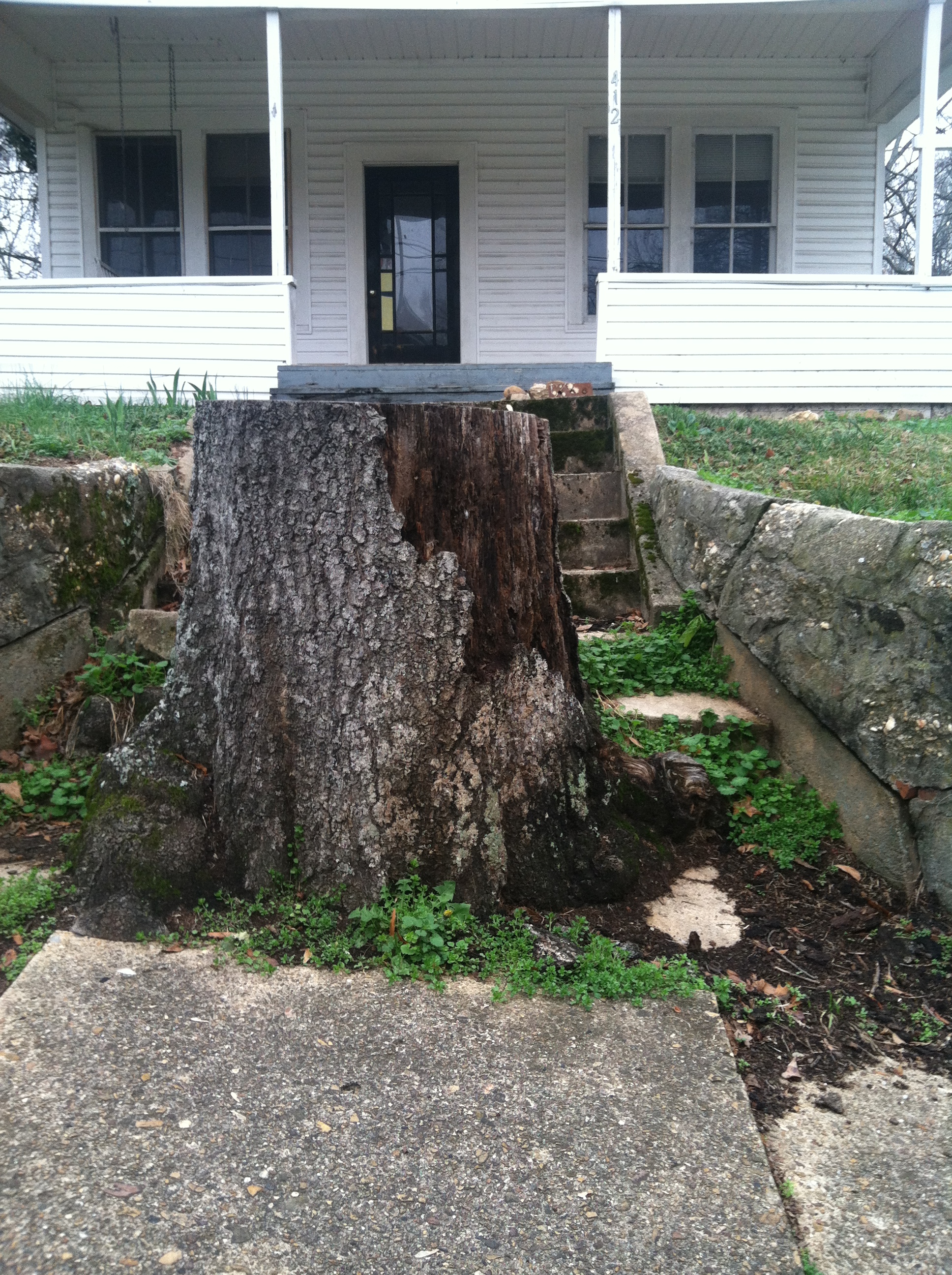 After driving by it several times, I began to wonder: Which came first – the steps or the tree?  Was a tree planted, then stairs built?  Or were the stairs first, and later a seed fell and a sapling happened along?  If the tree came first, did the builder of the stairs think the tree would remain small, like a quaint conversation piece along the sidewalk and stairs?  Were the homeowners unaware that the tree – given adequate nourishment and attention – would grow to overcome the walkway, buckling the sidewalk, barricading the stairs?

Zephaniah 3:15 – “The Lord has taken away the judgments against you; he has cleared away your enemies. The King of Israel, the LORD, is in your midst…”

We have entered the season of Advent, a sacred time of our Christian calendar year.  It’s a season when we remember what it’s like to yearn for the Messiah’s arrival, for the coming of the Lord.

But is there something that stands in the way of God’s arrival?  Has there been a “growing” issue that you’ve ignored, side-stepped, denied its existence?  Is there something that has taken over your life, that stymies your growth and keeps Jesus at arm’s length?  Perhaps a root of bitterness surfaced, pushed through, and tripped you up?  Has an ungodly habit truncated your relationship with Jesus?  What is it that stands between you and the pathway of Jesus?

Behold, He stands at the door and knocks.  Or maybe He is way out there on the sidewalk, yelling your name, asking to draw near.

The stump is that one thing, that big issue that – you came to find out – was behind all the other twisted twigs and barren branches that you worked hard to cut out of your life.  It started small, unnoticed perhaps.  It just happened to land there, but slowly it took root.  A seed in your mind that wasn’t dealt with years ago. Sprouting spindly roots.  And it grew.  And Grew.  And GREW.  Maybe what started off as interesting, novel, is now in the way.  Impeding progress.  Impeding Presence.

Maybe your tree of temptation has been trimmed, partially dealt with.  The big branches of doubt that once draped and darkened your life have been removed and hauled away.  Thank God.  And when everyone else is raking leaves as evidence of the Fall you don’t have that chore to deal with.  Again, thank God.

Yet a stump still impedes progress. Even worse, the stump impedes Presence.

Now you are left with the root issues, the one stump you couldn’t pull on your own strength.  Your blade was strong-willed enough to saw off a few limbs.  Your pride big enough to climb into the treetop to cut the highest branches, trimming this thing in your life.  But not before it outgrew your life, and your ability to control it.

You’ve done all you can do.  So now what?  You could ignore it.  You might even uncomfortably squeeze past it.  You can even use it to sit on and ponder the ascending steps in front of you, dreaming of where the path may lead.  But you sense it’s more than merely impeding your progress; it impedes Presence.

When we fail to deal with root causes and their burgeoning stumps, is it fair to ask God to ignore them? This Advent, as we voice our deep longing for God to come, do we expect Him to squeeze past those things that we’d rather deny.  He can’t slide past those stumps en route to us because, well, those things are a part of us.  To squeeze by the stump is asking a mercy-giving God to walk past us, to walk past an opportunity to do what He does best: Forgive. Us.

Forgiveness can’t take place without our first agreeing, confessing to the overgrown realities of our life.  The reality of our life as it is, not as we hope or wish it to be.  We may have done a lot of work to whittle away at our problems, but still a stump remains.

Those dam stumps.  Literally, those stumps that dam us, that keep us from progress, and even more from Presence.  Do we grow content with a God-on-the-sidewalk?

Do we risk the long view and have it removed?  Removing it involves grinding it out, digging it up.  It’s dirty and earthy and humbling.  Pulling stumps is nothing like when you tried smoothing them over.  Pulling stumps deals with the roots, the beginnings, the unseen things that first served to feed the beast that went on to grow and to barricade us from Presence.  It isn’t pretty, stump pulling.  But when all the work is done, it clears the way for Presence, for Jesus to join us on the porch.

All the clearing and stump pulling begins with this: Confession.  Confession is simply agreement.  We begin by agreeing that there is stuff that has grown up in awkward places of our soul.  We confess that a stump in the stairway is a stump in the way.  And the problem is NOT that the stump in the stairway looks weird and awkward; rather the greatest issue is that it interferes with Presence.  The most heart-rending result of a stump growing in our stairway is that we are left sitting alone on the porch.

In all my typing, frantic to get my thoughts on virtual paper, I am just now realizing perhaps the greatest point of all.  It’s an ironic point.  For the stumps that block our stairways, God has an answer: another Tree.

Jesus pulled our stump up a stair-less hill.  I wish I had a picture of that.  Grace and forgiveness are words used to describe it, but they almost sound understated in light of the size of the stump.  You gotta experience it for yourself and witness the absurdity of it.  My stump carried, shouldered, pulled.  Presence no longer impeded.