A raw, scraping sound emanated from the front right of my truck every time I turned the steering wheel sharply. I wondered, initially, if some steering components had come loose or if suspension parts had broken off.

I pulled into the driveway and chocked the back wheel with a block of wood. After opening the hood it took about 4 seconds to identify the problem: the battery tray had rusted through the inner fender wall, causing the battery to fall to the point that it was rubbing against the front tire. The positive and negative battery cables, stretched tight, were all that kept the battery from falling any further.

This begs the question: When your battery rusts through a fender, nearly landing on the street, is it time for a different truck?

I temporarily resolved the problem using old license plates. Just so you know, this will be the second time license plates have come in handy. For the first license plate repair job, TJ and I riveted license plates to the floorboard to cover a hole. A Florida tag on top, an Alabama tag underneath. I gotta say that it turned out pretty cool, in a ratrod sort of way. 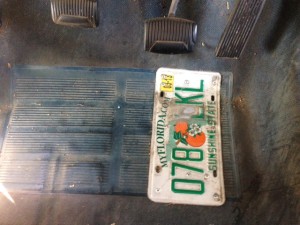 So when it came to patching the rusted battery tray, I figured I would utilize two more Alabama license plates. I bent the tag 90 degrees, forming a shelf, and bolted it to the radiator support. I bolted the second license plate to the first. The two plates combined to bridge the void caused by rotted metal, forming a Sweet Home Alabama ledge for the battery. 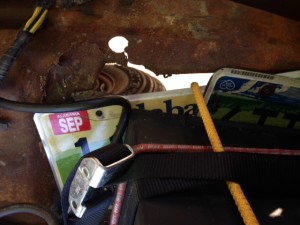 Practical? Yes. Unsightly? Without a doubt.

Some repairs “fix,” while others patch and buy you a bit more time, a few more miles until the inevitable.

I spent time studying Romans 8:28-30 in preparation for a message I shared on July 5. There is a phrase that describes how all circumstances work towards our good, and “good” is later defined as “conforming us into the image of Jesus.”

When I hear the word “conformed” I get a visual image of being reshaped, bent in a new direction. The conforming spoken of in Romans 8 begins internally, reshaping heart and thoughts and desires so that we are bent towards Godliness. If you could have witnessed the reshaping of aluminum and rusty metal on my truck, you’d see that it’s not a pretty process. Decayed metal trimmed away. The teeth of vice grips clamped down on the fender wall, pried it back to its original, intended place. The aluminum tags were hammered, drilled and bolted.

When my life gets so bad, so shot through with holes that I keep falling, it begs the question: Is it time for a different life? You’d think that with the limitless resources God has He’d move on to the next person — one less unsightly, less prone to falling through.

The problem begins with my fallen-ness, which becomes apparent each time I rub against the direction God wants to steer my life.

Why do I fight against the direction He’s steering me? Not only is my rebellious rub uncomfortable for me, but it also leads to a challenging and sweaty work by God. Unselfishly He chooses what is best for me rather than what’s easiest for Him. I suppose that if I can’t stop falling, the least I can do is yield to his re-forming when I do.  To have a God-ward bent I must undergo a reshaping process.

I’m learning that God can use all things, many tools and techniques, to conform me to a more Jesus-like life. Some of me gets trimmed away. Vice-like circumstances squeeze with an unrelenting grip. Slowly – and I emphasize slowly — I respond to God’s attempts to use anything in life to restore me to His place and purpose.

With California tags affixed to the front and rear of the truck, consider how hopeless it appears having two other states represented in the engine bay and floorboards. The extra license plates remind me of this valuable truth: God can use anywhere I’ve been in life to cover the holes, giving me character, keeping me on the road. This God of mine has a grace-filled affinity for the entire human, ratrod race, and seems to be OK with patch jobs rather than giving up on us.